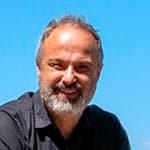 With this poster, ITINERE would like to reveal one of the least known aspects of the city of Tarragona: Its image in the medieval era, at the end of the XIV century. For this purpose, as we did 10 years ago with the image of Tarraco, we have once again been blessed with the collaboration of Hugo Prades, an illustrator who specializes in historical projects.

Following the fall of Romeand after two centuries under the rule of the Visigoth elites, the city of Tarracona was taken by Muslim troops in the year 713.

The inhabitants fled, and we know for certain that the church authorities set off from the port to the safer lands of the Italian Liguria. From this moment onwards the city of Tarragona remained practically uninhabited, lying between the frontier of Al-Andalus to the south and the Christian territories to the north, known as the Hispanic March, and later the Catalan counties.

After some failed attempts at recuperation, it was eventually repopulated at the beginning of the XII century. The population of the new medieval Tarragona reached, at best, 5000 inhabitants.

As you can see in the image, the populated area was limited to the current old quarter of Tarragona which is situated upon the old Roman acropolis, an area within the walls albeit much smaller than Roman Tarragona. However, because of a very notable Christian past, an impressive Cathedral was erected at the apex of the small city.

The district of the ecclesiastical elites was called the villa ecclesiaeand was situated upon the ancient area of imperial worship.

At its feet, crossed by the Calle Mayor (main Street), the bulkof the population was housed in the so-calledvilla veteris or old town, in contrast to the “vila nova” (new town), an almost insignificant grouping of houses on the seafront outside the walls. The main part of the city was formed on a gridof streets covering the interior of the enormous Provincial Forum (the former government of Hispania Citerior.

Further down, covering the ruins of the old Roman circus, you can see the corral area which this suburb was named after, with its concourse for jousts, tournaments, and the cattle fair.Today it is the Plaza de la Font, full of bars and restaurants with terraces in front of the Town Hall.In the numbered plan one can see all the most prominent buildings in the interior of the city and the sanctuaries located on its slopes or “the outskirts of Tarragona”.

Xavi Mejuto
Catalan Guide number 829. Xavi founded Itinere in 1997 when only 26 years old, and now feels proud of the team he has built up over the years. A veritable expert on Tarragona and its history, he is pleased to act as host to the city.